The ESY-MAP is a diagnostic tool for assessing the quality of a national Environmental and Social Impact Assessment (ESIA) system. Practitioners and stakeholders involved in ESIA in a particular country, jointly apply the tool in an interactive workshop. They analyse ESIA requirements and performance with the help of a standard set of questions. The outcome is a graphical representation of the quality of the current ESIA system. This informs a shared view on strong and weak points, and where action is most needed.

How does it work?

At the heart of the ESY-MAP is a questionnaire that addresses key elements of the ESIA system. It consists of two levels. There are 37 Quick Scan questions that address the ESIA system more generally. Each of these questions is linked to a second level: a set of 150 detailed questions for more refined analysis. These 150 questions make up the Detailed Scan of the ESIA system. The ESY-MAP explores both regulatory requirements and practice. It considers ESIA steps prior to project approval, as well as what happens afterwards in decision making and during project implementation. The mapping questionnaire is presented as an Excel workbook of interlinked spreadsheets. When completed correctly, the ESY-MAP unfolds as a series of graphs; both statistics on ESIA and the stakeholders’ expert judgement scores on ESIA quality. 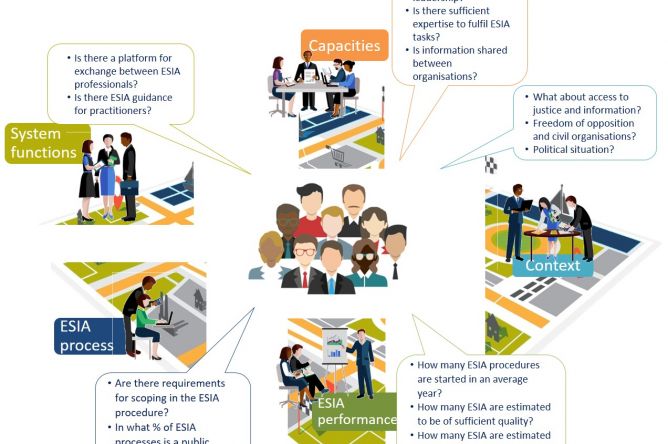 When should ESY-mapping be used?

Firstly, when there is a need to get insight into what could work well in ESIA, and what the priorities for improvement should be. The stakeholders jointly identify areas to be strengthened to increase the effectiveness of ESIA application. Secondly, to track the development of the ESIA system of a particular jurisdiction. For example, in a number of Central African countries, a series of mappings was undertaken in 2005/2006 and then again in 2013. Comparison of the results revealed a significant evolution, both in terms of the legislative framework for ESIA and performance in practice. For example, there were improvements in the production of ESIA reports as well as in environmental and social authorisation.

The questionnaire is based on the NCEA's and SAIEA’s (Southern African Institute for Environmental Assessment) understanding of good practice in ESIA systems. It is also informed by the standards for ESIA applied by international financing institutions. However, the ESY-MAP is not intended to be normative; there is not one ESIA system that is the best for all countries. ESIA arrangements should fit the specific country situation. Given the context, the ESY-MAP facilitates the discussion on what the priorities for ESIA improvement are.

A work in progress

The ESY-MAP is the result of combining two existing tools: ESIA Mapping developed by the NCEA and the ESIA Barometer, developed by SAIEA. Before 2019, these mapping tools have been applied over 40 times in many different countries. Each application brought new lessons about the tools’ effectiveness. This led to regular updating and revising, and finally the integration of the two tools into the ESY-MAP. This new version was piloted several times in 2020, and has now been finalised for further application. The development of a comparable tool for Strategic Environmental Assessment is also in preparation.

What is needed to run the ESY-MAP?