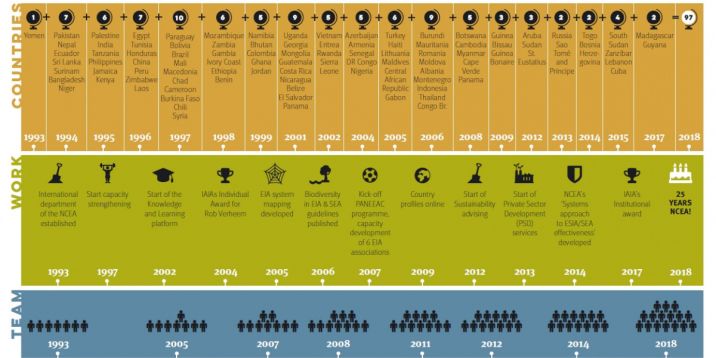 EIA is a mandatory legal requirement in Pakistan, starting with the promulgation of Pakistan Environmental Protection Ordinance (PEPO) of 1983 (repealed in 1997). EIA became mandatory for all new projects in July 1994. Other major events for EIA were the enactment of Pakistan Environmental Protection Act (PEPA), 1997 followed by the IEE/EIA Regulations of 2000. These provided the key legal basis for EIA in Pakistan until 2011.

After 2011, EIA responsiblities were decentralised, and since then provinces and independent regions have developed their own EIA regulation. This has introduced variation in the detail of the requirements for EIA throughout the country.

This profile is based on the national IEE/EIA regulations, that still apply at the federal level, and have served as the basis for the provincial regulations.

The National Environmental Protection Agency (Pak-EPA) has issued a set of general guidance documents to complement the Act of 1997. These include:

The following sectoral guidelines are also available (albeit quite dated):

Pak-EPA, and "Quality of the guidelines for preparation and review of environmental impact assessment reports in Pakistan" by
Rizwan Hameed &Obaidullah Nadeem, Impact Assessment and Project Appraisal Volume 37, 2019 - Issue 2.

All projects, public, private, national and international, as listed under the EPA (Review of IEE and EIA, 2000) require an EIA. But note that there are regional differences.

The National Environmental Protection Agency (the Federal EPA or Pak-EPA) has jurisdiction over all IEEs and EIAs in the federal region. Within the provinces and the independent regions of Pakistan, the provincial level Environmental Protection Agency is responsible.  According to the governments guidelines, issued in 1997, Pak-EPA is also responsible for military projects, and projects involving trans-border or trans-province effects.

Other governmental institutions involved include in of IEE or EIAs will differ per region, but may include:

EIA mandates have been decentralised. The provinces and independent regions have developed their own detailed legislative framework for EIA, and administer the procedures withing their jurisdiction.

The proponent pays a fee at the time of submission of an IEE or EIA to the relevant EPA. Fees are determined at the provincial level.

The EIA procedure generally requires: screening, scoping, preparation of Terms of Reference for the EIA, assessment and preparation of an EIA report, public notification and a public hearing, and review. Thereafter, a decision on the EIA approval is taken and follow-up compliance monitoring is required.

Important documents of the process are the following: Scoping report and ToR, EIA report.

Screening is a required step and conducted by the EPA at federal level and by Provincial EPAs at provincial level.

In Pakistan, two levels of environmental assessment are distinguished: Initial Environmental Examination (IEE) and full EIA. Screening is based on both an preliminary IEE and positive lists (schedules) contained in the EIA Regulations, 2000 or in the relevant schedules in provincial regulation. These schedules prescribe the groups of activities that require either an IEE or an EIA:

The preparation of the IEE and the screening stage of an EIA are not open for other stakeholders apart from the proponent and the EPA.  Additionally, sectoral guidelines contain checklists of environmental parameters that can be used to aid screening decision.

All activities within environmentally sensitive areas, as described in the 'Guidelines for sensitive and critical areas' (1997), require a full EIA. The guidelines advice on the procedure to be followed for projects which (might be) located in these areas. In these cases, the proponent is required to contact the Conservation Authority for advice.

Scoping is a required step.

The proponent formulates the Terms of Reference; these do not have to be approved. The basis for determining the scope of the EIA derives from the sectoral guidelines, which includes a checklist on likely impacts and mitigation measures for several activities. The following steps for scoping are described in the guidelines:

Guidelines for the preparation and review of Environmental Reports, p.9

The scoping document should contain:

The Guidelines for the Preparation and Review of Environmental Report indicate that environmental, social, health and economic impacts shall be considered in the EIA report.

It is advised that an Environmental Report should contain:

A detailed EMP is usually not part of the Environmental Report, but rather a comprehensive outline of the structure of it with a summary of the management principles to be followed. For issues of high risk and uncertainty, details of management should be included in this outline.

The EPA or the provincial EPA are responsible for the review process. The EPA is required to consult a Committee of Experts,  Sectoral Advisory Committee, other government agencies, NGOs and the affected public. Review criteria is on a case-by-case basis.

It is advised that the criteria should consider:

Generic steps for review are described in the EIA guidelines for preparation and review of environmental reports.

IEE and  EIA are reviewed by government experts and experts from other government agencies. NGOs and affected community members are also permitted to review these reports.

The IEE is reviewed within 45 days and the EIA within 90 days.

EIA approval is separated from the final licence of the commencement of the project. The proponent of any activity listed under schedule I and II of the EPA-IEE and EIA regulations, 2000 needs a formal IEE or EIA approval from the EPA before any project approval.

The EIA approval comes along with conditions for it.

The decision-making procedure depends on whether private sector or public sector projects are being considered. The final decision on the Environmental Approval for private projects is taken by the responsible authority (EPA, provincial or district authorities in co-operation with other Departments and Agencies).

Decisions are justified in writing. Schedule IV of the EIA regulation, 2000 provides a form that EPA uses as decision note.

The EIA guidelines stipulate that a register of decision is made available to the public. It does not however state whether the decision should be published.

The proponent is required to submit a monitoring plan as part of the EIA report. Before commencing operation of the project, the proponent should send a confirmation of compliance, accompanied by an Environmental management Plan. After completion of the construction of the project, the proponent is required to submit an annual report on the operational performance of the project, with reference to the conditions of the approval and maintenance and mitigating measures adopted for the project. EPA is responsible for monitoring of conditions of approval and may require additional information from the proponent and can carry out an inspection for this purpose. EPA may cancel the approval, based on the information in the annual report or its inspections.

There are possibilities for external monitoring. In the case of a major or controversial project, the guidelines state it is desirable to establish a monitoring committee, comprising the proponent's project manager and environmental staff, key Government Departments and Agencies, and representatives of the local community.

Public consultation should occur in the preparation of the initial IEE, the assessment of impacts, the reviewing stage and decision -making stage and during monitoring. Audits of EIAs for both public as private projects are reviewed by stakeholders and the public after a preliminary review by the responsible authority.

Comments on the EIA report may be written and oral.

All comments received should, in accordance with the EIA Regulations, 2000 be duly considered, before a decision is made on the EIA. It is not however specified that the level of influence of these comments should be provided.

Public hearing should fall within 30 days of newspaper notice.

EIA reports are public documents and the review thereof, including the decisions, is made public. A register of EIA decisions is kept at EPA and is available to the public.

In case of an EIA, the Federal Agency publishes in any English or Urdu national newspaper a public notice that mentions the type of projects, the exact location, the name and address of the proponent and the places where the EIA of the project can be accessed. This notice contains the date, time and place for a public hearing. The public hearing takes place, at least thirty days after publication of the notice. The review and the decision are public documents.

The final approval/ clearance and the decision for project approval can be appealed against.

Any persons aggrieved by decisions of EPA at Federal or provincial level may appeal with the Environmental Tribunal within 30 days.

Provincial EPAs maintain separate registers of all IEEs and EIAs. EPA should be informed on the progress of all IEE and EIA processes and adds this information to its own registers.